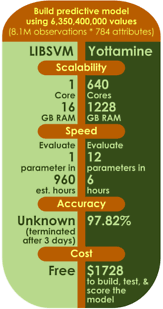 The control software for the test was the production version of LIBSVM, the most popular machine learning program in the world. The control ran on a dedicated Xeon server, but was able to use only one of its four available processor cores.

Revisiting a classic machine learning problem, the test examined 784 features in 8.1 million example images of handwritten digits to build a classification model that will accurately recognize new cases of written numbers, as might be needed in a forms processing or package sorting system.

The enormous processing required for building the model quickly overwhelmed the single-threaded LIBSVM control software. But highly parallel Yottamine sliced through the Big Data with ease, demonstrating an 1800% speedup over the popular free program.

The control software could not complete the test of a single parameter in three days before being terminated; completion would have taken 40 days. Yottamine processed all parameters in just 6 hours and delivered a human-like 98% accuracy. The software usage price value for building the huge model was just $1,728.

“Yottamine is crazy fast, but it is also highly scalable, accurate, inexpensive, and very easy to use. The technology is transparent to the data scientists and the software eliminates a lot of tedious guesswork for them,” said Yottamine CEO and Founder Dr. David Huang, adding, “That’s the real power of core-to-cloud parallelism – it doesn’t waste compute power and it doesn’t waste people power.”

The Yottamine software runs as an online, on-demand service in a secure, dedicated compute cluster on AWS. It gives the data scientist complete control for building, testing and optionally scoring predictive models. Yottamine users pay only for the compute resources they use, starting at just $3.60 per compute node per hour.

For customers requiring on-premises solutions, Yottamine Analytics will release Yottamine On-Premises (OP) in the first calendar quarter and is seeking beta testers for it now.

Yottamine Analytics was founded in 2009 by Dr. Te-Ming (David) Huang to commercialize his original research in machine learning by offering cloud-based predictive modeling solutions that are faster, more scalable, easier to use, and more affordable than other available solutions. Yottamine Analytics now offers a growing family of high performance machine learning software.